Two Good Reasons to Use Google+

Two Good Reasons to Use Google+

Google is taking on Facebook with Google+. And for the most part, they’re doing pretty well. What did they get, like a million users in five minutes or something like that? The problem is, a lot of folks are signing up for the obligatory account and then not really taking advantage of it. And why should they? Except for CIRCLES, it’s pretty much the same thing as Facebook (to the average user, at least.) I would argue that if all your friends weren’t already on Facebook, and comfortable with its platform, Google+ would probably be a much bigger hit.

The main thing I hear from the average user is this: “I don’t need another social network. I have LinkedIn for business, Twitter for my celebrities and special offers, and Facebook for friends. Why do I need Google+?” Of course, anyone who effectively leverages social media effectively knows that’s an oversimplification. LinkedIn, Twitter and Facebook can be used for so much more.

1) Google+ results are integrated into Google search in a way that Facebook and Twitter aren’t. As an example, everything I write on my blog is posted to my “Professional Facebook” and always has been since starting it. While it’s a public page with a lot of content, it doesn’t rank as well as my Google+ Page. In fact, when my Google+ page had ONLY FOUR posts on it, it was ranking better than my Facebook and even my blog. Everything I know about SEO says that shouldn’t be the case. But Google is clearly giving Google+ profiles a little extra bump, so I would recommend you take advantage of that in order to get better rankings.

2) Duplicate content is a big issue. If Google sees duplicate content on two web pages, they’ll only rank one of them for that content. So if you’re a writer, or if you want credit for the fresh content that you just added to your website, how do you prove to Google that you’re the original author? Simple. As soon as you write it, post it on Google+. Google crawls their own Google+ feed religiously and will then have a record of your content in their index at an earlier date than anyone who may scrape and steal your content later. In other words, if you write it, plus it to protect it.

There are certainly more reasons to use G+, but I wanted to share those with you for now. I gotta run so I can post this on my G+ before anyone else takes credit for it.  🙂

One more thing: Social Media Examiner has written an excellent step by step instructions to setting up Google+ for business.

So immediately after publishing this post, I did, in fact, post the link to the article on my Google+ page. I then opened another browser (one where I was NOT logged into Google) and searched for “Two Good Reasons to Use Google+”. As expected, there were no results related to my article. 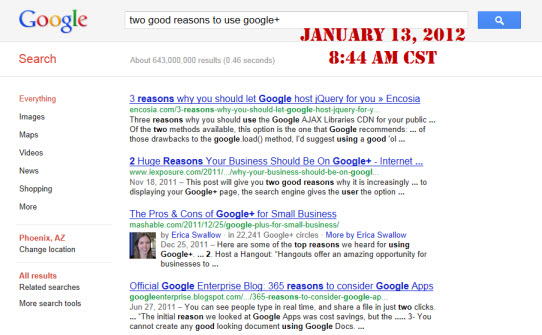 The next thing I did was to set a timer for 30 minutes. When the timer went off, I searched again. Take a look at what Google had already found and indexed: 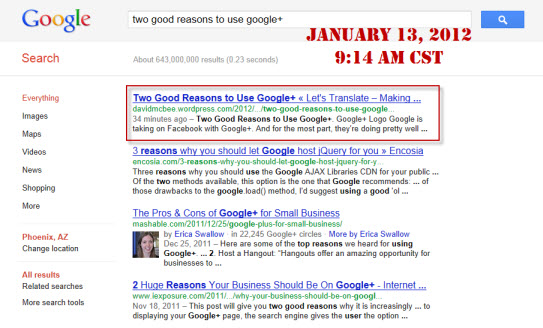