So you probably understand by now that display ads are targeting you based on the websites you visit, the keywords you search and the content that you read, right? We’ve all shopped for boots or sneakers, only to see them appearing in display ads a few minutes later as we surf the web.

You may have even felt that this kind of targeting was a little creepy the first time you experienced it. But if you’re like 85% of consumers (source: Bizrate), you’ve developed a positive or, at least neutral outlook on targeted display ads. Perhaps you’re of the mindset that if you have to be served ads to keep the web free, they might as well be relevant to your interests.

The “digital breadcrumb trail” that we leave on our desktop computers already tells a lot about our interests. Nearly every website we visit records the keywords we search and the content we read; and that data is sold to data collection companies as a part of our online profiles. And thanks to our computer’s IP address, the data comes with some pretty accurate geo-data associated with it. This is what has allowed local businesses to target specific cities or even a radius around their business

Well it’s about to get a lot more targeted and it’s all thanks to a tactic called geo-fencing.

Thanks to the abundance of smartphones and the apps that require the phone’s location services to be turned on, most smartphone users are transmitting the latitude and longitude coordinates of every place they go – in the real world.

How do you think Facebook knows where you are when you check in at that trendy restaurant, or how Apple’s Find Friends app can show you exactly where your friends are, putting Harry Potter’s Marauder’s Map to shame?

Your “mobile digital breadcrumb trail” has the potential to show every place you physically visit and data collection companies and local advertisers are very interested in that.

Can you imagine how powerful that geo-data will become to advertisers?

Allow me to paint you a few pictures of what you will soon be experiencing.

You’re shopping for a car. After doing tons of online research and being targeted by display ads on your computer, you’re influenced to go to one of the largest dealerships in your city, “Superior Toyota.” You look around the lot, maybe even drive a car or two, but like most of us, you don’t make a decision on the spot.

A little later, when you get your phone out to play Candy Crush or listen to your favorite streaming music app, you’re presented with an ad from “Terrific Toyota”, a dealership across town. The ad highlights their big tent event so you decide to go check it out.

Later that evening, you’re at the Los Angeles Angel’s game with some friends. Between innings you pull out your smartphone and are presented with ads for local sports bars, restaurants and even sporting goods stores nearby. You even see an ad promoting Angel’s merchandise and future game tickets.

These advertisers are using geo-fencing to target an audience based on a specific location, in this case, Angel’s Stadium. 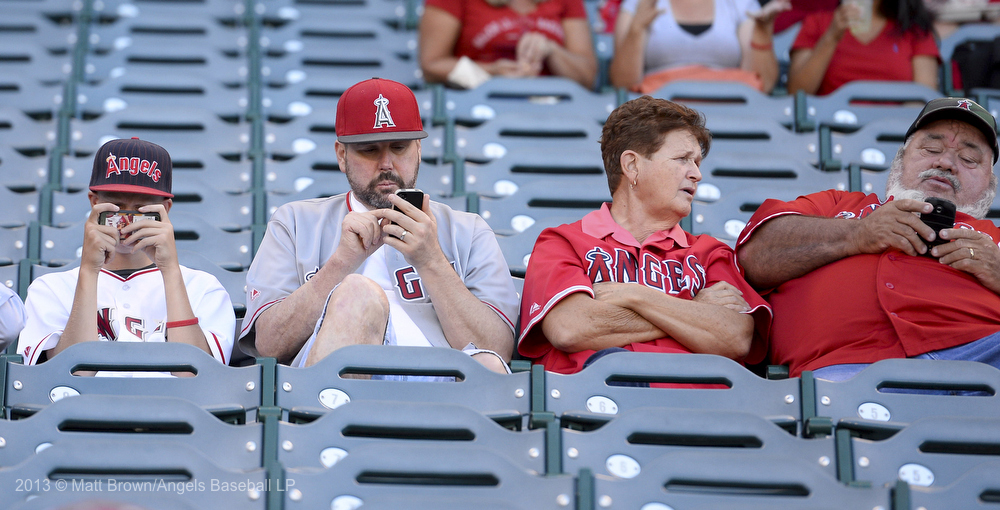 The next day, you start to see ads for Superior Toyota. They want you back and they’re not going to let you go without a fight. Superior Toyota is using geo-fencing to target anyone and everyone who has come into their location.

From an advertiser’s point of view, this new technology is exciting. Never has there been a way to target users who were visiting the competition, or target users who stepped foot in a place where advertisers knew their best customers frequented. And unless they found a way to capture their email addresses while they were there, advertisers didn’t have a way to show their ads to those people who had come to their location.

As consumers, we may find it a little spooky the first time we start seeing ads for upcoming movies right after leaving the movie theater, but let’s face it, we’re better prospects than the folks at home who wait for the red-box or the download. Why wouldn’t Hollywood want to target users who … actually go to the movies?!

We may be a little creeped out when we’re playing Trivia Crack at Applebee’s and get an ad for Chilli’s. And we may find it a little off-putting when we see ads for Taylor Made golf clubs when we’re checking our social media just before teeing off on the ninth hole.

But if we’re like most people with a smartphone we’ll recognize that if we have to see ads anyway, they might as well be for the stuff that interests us. So we’ll get used to it, and maybe… just maybe, even start to like it.