A few weeks ago, I wrote a piece called The Do’s and Don’ts of Business Facebook Pages for thinkingBIGGER Business Media Inc. The title speaks for itself and like a lot of what I write, it was pretty high level stuff. Most of it was pretty common sense.

But since writing that piece, I’ve attended BOLO 2011, a great digital media conference with a huge focus on Social Media. That conference, combined with a great article from TechCrunch, and I’ve learned a thing or two that I‘m not sure the average facebook user is aware of – good stuff – the kind of stuff you want to know if you’re running your business’s facebook page.

In keeping with my “introduction to internet marketing” style of teaching, I’m here to do my best job of explaining EDGERANK in a way that anyone can understand.

EdgeRank is the formula that Facebook uses to decide whose posts show up in the news feeds and how often. Wait. You thought all your facebook fans could see all your posts? Most of them, at least? Truth is, that depending on how many fans you have, as little as 10%-25%* of them could even be seeing your updates. That’s because, unlike twitter, facebook tries to show the most popular, most relevant, bestest stuff in the news feed.  And that’s what EdgeRank is all about.

Next, there are three basic elements in the EdgeRank recipe.

Affinity Score measures relationships based on interaction. You’ll have a higher affinity score with a close friend whom you interact with on facebook more than you will with that old high school friend you friended but barely remember. If you’re commenting on a lot of Starbucks’ posts, for example, you may have a higher affinity score than another fan who never interacts with Starbucks. This might mean that you see their posts more often than others.

Then there’s Time. As the edge gets older, it becomes less relevant and loses a little of its EdgeRank. 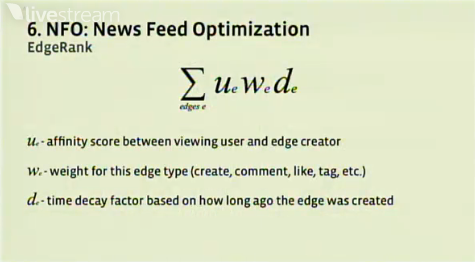 Multiply these factors for each Edge then add the Edge scores up and you have an Object’s EdgeRank. And the higher that is, the more likely your Object is to appear in the user’s feed. It’s worth pointing out that the act of creating an Object is also considered an Edge, which is what allows Objects to show up in your friends’ feeds before anyone has interacted with them.

In other, hopefully less confusing words, an Object is more likely to show up in your News Feed if people you know have been interacting with it recently. That really isn’t particularly surprising. Neither is the resulting message to developers: if you want your posts to show up in News Feed, make sure people will actually want to interact with them

So… here are some tips for getting more Edge: 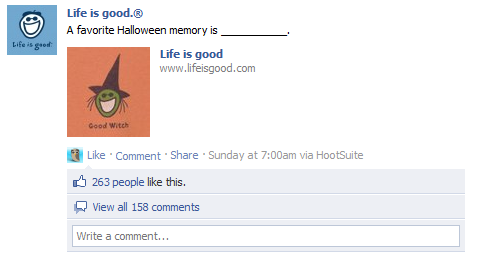 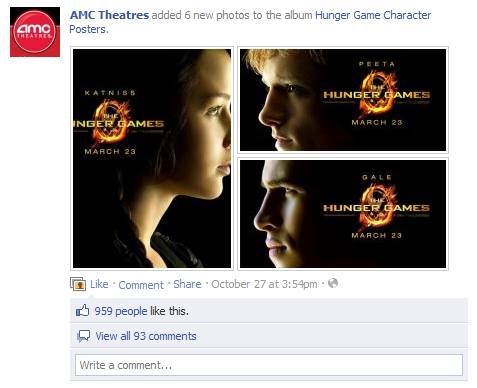 Here’s something else to consider. Let me ask you two questions.  One – how many pages are you a fan of? The average answer is probably somewhere between five and twenty. Two – in the past six months, how many of those pages have you visited? One, two, zero? The truth is that most fans don’t ever go back to a facebook page once they’ve liked it. So don’t spend a lot of time fancying up your facebook page or creating special tabs. Spend your time adding fantastic content that your fans will want to interact with so that you can get your brand into their news feeds as often as possible.

* The statement: “as little as 10%-25% of [your fans] could even be seeing your updates” comes from statistics provided by PageLever.