I read a quote recently on MediaPost that got me thinking about how my family watches television and movies. It read: “Contrary to conventional wisdom only a short time ago, it’s becoming clear that consumers are happy to watch just about any type of media content on their small screens.”

Later that evening, I was sitting in my favorite spot watching the 55-inch television prominently displayed on the wall between my bookcases. My wife was going back and forth between the show on television and whatever was on her iPhone. Both of my kids (13 & 18) were sitting with us, but each had in headphones and were watching their own shows on their phones. (Now that we’ve watched every episode of The Office, it’s just so hard to find something we all can agree on.)

And that’s fine. Back when I was a teenager, we all just watched whatever Dad was watching. It’s not like we had our own televisions, let alone portable devices that streamed nearly every show in existence.

Still, you’d think there would be some push-back, some level of “I want to watch my show on the big screen tonight…” kind of arguments. But no. Everyone is perfectly content to watch their shows on 5.5-inch screens.

And it’s not just the kids. Later that evening when my wife fell asleep but I was still wide awake, I watched an episode of Star Trek on the CBS app on my phone so as not to wake her up. Did I mind that I couldn’t watch on the big screen? Not at all. Do you know why?

When I hold my phone at a comfortable viewing distance, it appears to be the same size as the big screen on the wall. Only this time, the bookshelves are in the background and I can barely see them. Shows on the 5.5-inch screen look just as good as or better than they do on the 55-inch screen. It’s all about proximity.

It kind of reminds me of the old Kids in the Hall “I’m crushing your head” routine. Remember that? When viewed at a distance, people’s heads were tiny enough to “crush” between a person’s thumb and forefinger. Silly, of course, but it makes the point. At 13 feet away, the images on the big screen are actually quite small.

Thanks for reading. -David McBee

The Effectiveness of Frequency in Advertising

The Effectiveness of Frequency in Advertising 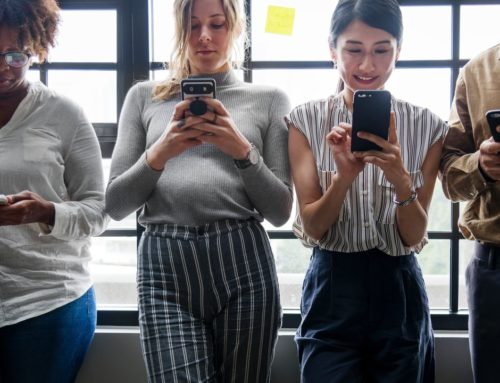 Over ONE HUNDRED Awesome Mobile Stats

Over ONE HUNDRED Awesome Mobile Stats

SEM and Targeted Display. Two worlds collide. And the results are awesome.

SEM and Targeted Display. Two worlds collide. And the results are awesome.